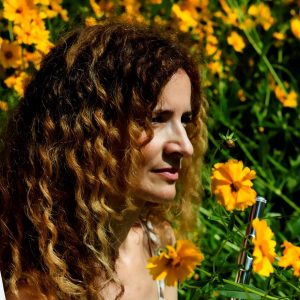 Ines Ivanjek was born in Zagreb, where she completed her primary and secondary education and graduated from the Centre for Culture and Arts. During her education she had won numerous awards in state and national competitions, and she is the only flutist of her generation who had won first prizes in all competitions of the former Yugoslavia (national competitions in Skopje, Ljubljana and the last competition held in Dubrovnik in 1991). She continued her education at the Zagreb Academy of Music and won numerous awards as a soloist and member of various chamber ensembles, which later influenced her engagement in chamber music performances. She won the Darko Lukić Diploma, the Darko Lukić Award for best performance of a Croatian composer as part of the cycle of the Croatian Association of Music Artists, and the Rector’s Award. During her studies she performed with the Orchestra of the Croatian National Theatre in Zagreb, the Croatian Chamber Orchestra, the Symphony Orchestra of the Croatian Radio and Television and the Zagreb Chamber Orchestra. She attended numerous seminars in Croatia and abroad — held by V. Prats (Spain), M. M. Kofler, R. Wolf (Austria), J. Valek (Czech Republic) and P. Dumail (France). After graduating in the class of Professor Vladimir Kondres, she continued her education at the University of Music and Performing Arts in Vienna in the class of Professor Barbara Gisler. The invitation of the former director of the Dubrovnik Symphony Orchestra took her to Dubrovnik where she was the flute section leader until 2012. She acquired great experience as a member of the Dubrovnik Symphony Orchestra, spanning from baroque music to jazz, including concert performances of operas. She also regularly performed as a soloist. In 2002 she completed her master’s studies at the Academy of Music in the class of Professor V. Kosir. During her years in Dubrovnik she was also a successful pedagogue at the Luka Sorkocević Art School and her students achieved good results and won prizes (two ist prizes in the Regional and two ist prizes in the State competition of pupils and Students organised by the Croatian Association of Music and Dance Pedagogues). She was also a member of several chamber ensembles and she performed regularly as a soloist. She had the honour to represent Dubrovnik at the Festival in Sorrento during one of her many tours. After being a long-time member of the Dubrovnik Symphony Orchestra, in 2012 she returned to Zagreb, where she ocassionally collaborates with the Symphony Orchestra of the Croatian Radio and Television, the Wind Orchestra of the Croatian Armed Forces and the Croatian National Theatre in Zagreb. Ines Ivanjek is a member of the chamber ensemble La Musica Bella, founded in 2017, along with L. Mravunac Fabijanic, D. Golčić, P. Zajcev and I. Ivanjek, and they perform the works of various composers from different periods – from baroque to contemporary pieces and, when required, with a different set of instruments. From 2018 she is a member of the RIM chamber ensemble.