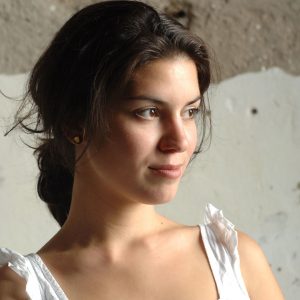 Ivana Jelača was born in Dubrovnik in 1985. She completed her elementary and secondary music education at Music School Luka Sorkočević in Dubrovnik.  In 2008 she graduated from Music Academy, University of Zagreb, where she was in a class of Professor Ljubomir Gašparović. She furthered her education with postgraduate Specialization studies at the Academy of Music, University of Ljubljana (Slovenia). Furthermore, she went to numerous international master courses and summer schools in Dubrovnik organized by EPTA, led by R. Kehrer, J.F. Antonioli, D. Achatz, V. Krpan, E. Indjic etc. In July 1998, at the age of 12, she performed for the first time with the Dubrovnik Symphony Orchestra (conducted by Tomislav Fačini). She attended the Lied Master course for singers and accompanists, held by Dunja Vejzović and professor Konrad Richter. She performed regularly with the Dubrovnik Symphony orchestra, Dubrovnik chamber orchestra, and Croatian chamber orchestra and had numerous solo recitals (Vatroslav Lisinski hall in Zagreb, 45th Darko Lukić Tribune etc.).She took part in competitions of HDGPP (Croatian association of Music and Dance teachers) and won first and second prizes. Since 2006, when she took part in the International Summer Akademie Prag-Wien-Budapest, she permanently attended, in both Zagreb and Vienna, Master courses and private lessons held by professor Noel Flores.  In 2016 she finished postgraduate Specialization studies (piano) at Music Academy, University of Zagreb, in a class of Professor Ljubomir Gašparović, and under the mentorship of Professor Dalibor Davidović, PhD, with highest achievements ( work on a theme The art of playing piano sonata in the context of cultural changes). With this work, she has started her research on aspects of musical performance in the context of cultural changes and committed herself to performance on both historical and modern instruments. She performs regularly in the Music hall of the Rector’s Palace in Dubrovnik, on the fortepiano built in 1790 by Anton Walter. Ivana Jelača is the author of the RIM projects and a member of its chamber ensemble, with whom she performs regularly in Croatia and abroad. Ivana Jelača is also active in music pedagogy. She is the author of the Educational Cycles Gioachino’s Cuisine and Workshop M.U.Z.A., with the aim of educating new generations of audience. In 2018 she recorded an audio cd edition entitled Croatian composers and their contemporaries on Walter’s fortepiano from the Rector’s Palace in Dubrovnik, which was developed in collaboration with the Dubrovnik Museums. This cd edition was promoted at the 69th Dubrovnik Summer Festival. In the same Festival season, Ivana Jelača participated in the Workshop for the young pianist, led by renowned pianist Maria Joao Pires. Since January 2017 Ivana Jelača has been a member of the Croatian Freelance Artists Association. Since September 2020, Ivana Jelača is a PhD candidate at Orpheus Institue and KU Leuven (Belgium), with an artistic research doctoral project entitled Performing in the 21st-century salon: Tradition and  Innovation.

Ivana Jelača is the founder and artistic leader of the RIM organization since its beginning.