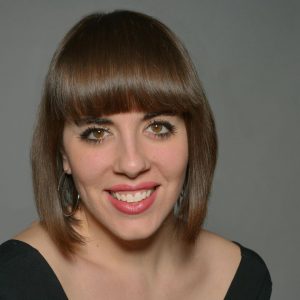 Marija Lešaja was born in Zagreb 1983. She attended the Blagoje Bersa Music School (elementary school-flute, Professor Vesna Hajdin, secondary school-solo singing, Professor Viktorija Badrov.) After studying philosophy and sociology, she studied at the Zagreb Academy of Music’, where she graduated in the class of Associate Professor Cynthia Hansell-Bakić. In 2008 she started a two year specialistaion at the University of Music and Performing Arts In Vienna, in the class of Professor Theimer and Professor Orlowski. She appeared in the roles of Gretel, Melpomene (Schlosstheater Schonbrunn Vienna), Euridice (Probebuhne : Mdw Vienna), Ida, Papagena, Barena, Čobanče, Berta (Croatian National Theatre in Zagreb) and Elle u La voix humaine (Croatian National Theatre in Varaždin), She performed as a soloist with Vjekoslav Šutej, Uroš Lajovic, Niksa Bareza, Tomislav Fačini, Igor Vlajnić, Josip Šego, Srboljub Dinić, with the Orchestra of the Croatian Armed Forces, the Zagreb Philharmonic Orchestra, the Opera Orchestra of the Croatian National Theatre Ivan pl. Zajc in Rijeka and the Music Academy Orchestra. She performed with the Cantus Ensemble, at the Chamber Music Festival in Vukovar, the Musical Evenings in St Donatus in Zadar, the Petar Nakić Organ Festival in Rab, at the Salon Očić (broadcasted live by the Croatian Radio), the Summer Festival in Rovinj, the Heferer Organ Festival, and the Passion Heritage Festival. In 2009 she was one of the finalists of the Nico Dostal International Competition in Austria. She attended seminars held by KS Olivera Miljaković, Dunja Vejzović, Rotraud Hansmann, Georg Nigl, Gerhard Zeller and Neda and Zeljka Martić. She was a soloist in the premiere of Mirela Ivičević’s musical suite for soprano Planet 8 alias Operation ae in Theatre &TD, which won the Josip Štolcer Slavenski award, and she performed at the opening of the 29″ Music Biennale ” in Zagreb in the premiere of the play The Frog Queen by S. Glojnarié, She is a member of the Freelance Artists’ Association since 2017, and a member of the RIM chamber ensemble from 2018.