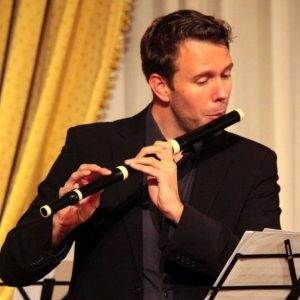 METOD SIRONIC started his musical education by enrolling in elementary, then secondary school “Ivana Matetić Ronjgova” in Rijeka. He graduated in the class of prof. Davor Bušić, and then enrolled in the High School of Music “Ino Mirković” in Lovran, in the class of prof. Tadeu Coelha. From the third year of study, she continues in class of eminent French flute and pedagogue, prof. Pierre-Yvesa Artauda. In June 2002 he graduated in the same class with great success. Intensive concert activity from high school continues throughout Croatia and in Italy, Slovenia, Hungary, Czech Republic and Germany. In October 2003, he enrolled in a postgraduate flute study at École Normale de Musique in Paris in the class of prof. Pierre-Yvesa Artauda and chamber music in the class of prof. Nine Patarčec as a scholar at the Zaleski Stichting Foundation and with the help of the City of Rijeka. In October 2004 he continued his postgraduate studies at the same institution as a French Government scholar and the Albert Roussel Foundation. In June 2005 he successfully completed his postgraduate studies at École Normale de Musique de Paris. After graduating from chamber music in prof. Nine Patarčec at the Ecole Normale de Musique in Paris also deals with pedagogical work as a flute professor at Ivan Matetić Ronjg’s Music School in Rijeka, holds seminars abroad and is a member of the jury at international competitions. He regularly performs abroad (Italy, Germany, Autore, Hungary, Macedonia, Slovenia, France, Czech Republic) and in the most prestigious concert venues in Croatia such as the Lisinski Big and Small Hall, Croatian Music Institute, Rijeka and Split National Theater and elsewhere. Since 2006, he has collaborated with the National Diary of Novi List, where he publishes his lessons, essays and reviews in the cultural weekly “Mediteran”. In January 2008, the Italian orchestra “Ventaglio d’Arpe” drew the composition of “Adieu à L.” in Split’s HNC, devoted to the  Hungarian composer Györgyiju Ligeti. He has also worked with other eminent flutists such as Aurelio Nicoleta, Vicens Pratt, Barhtold Kuijken and Emmanuel Pahud. Since 2015 he has worked with the Orchestra of the HNK Ivana pl. Zajc as an external collaborator at the site of the first solo flute. In recent years he has performed as a soloist and chamber composer playing the Baroque transverse flute, which he perfected with Martano Root (HFK Bremen) and Benedek Csaba. In 2018 he became member of the Croatian Baroque Ensemble at the site of the second transverse flute. He collaborated with the RIM organization  in 2014 on the Garden of Music project.