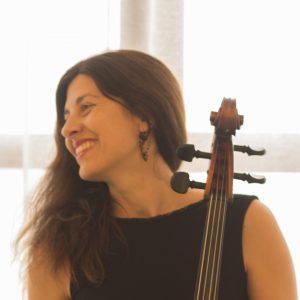 Nastasja Palčok was born in Dubrovnik in 1981. She completed elementary and secondary school in Arts School in Dubrovnik, in prof. Vanda Cobenzl Đanić class.  She continued her studies at the Elly Bašić Music School in Zagreb, in prof. Dobrila Berkovic Magdalenić class. She graduated in 2007 at the Art Academy in Split, in prof. Miljenko Šajfara class. During her studies, she collaborated with prof. Mihovil Karuza and prof. Piotr Tarasinkijević and  has participated in numerous seminars with eminent cellists such as: Nikola Ružević, Vladimir Perlin, Yevgeny Xaviereff, Francois Baudel and others. She appeared in various chamber ensembles and as an orchestral musician, she was a member of the Dubrovnik Symphony Orchestra.  She has been working as a cello teacher at the Arts School in Dubrovnik. She is a member of the duo Lingua Franca, which has been operating for four years and often performs as a guitar-cello duo, performing modern crossover repertoire. She has been a member of the RIM chamber ensemble since 2015.