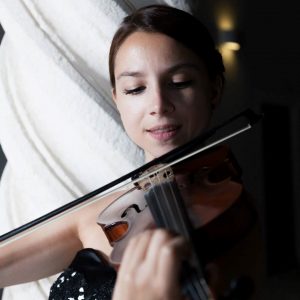 Ana Dražinić was born to a family of musicians in Dubrovnik. She finished her elementary music education under teacher Žarko Grego in her birth town. Her  education continued in Zemun, where she finished the Music School Kosta Manojlović. Afterwards she enrolled to University of Zagreb’s Music Academy in class of Professor Goran Končar and graduated in 2010. During her education she worked with many expert violin professors such as Zinaida Giliels, Ana Melnik, Asia Kouschner, Pavel Vernikov, Grigori Zhislin and Sreten Krstić. She has performed at the Dubrovnik Symphony Orchestra (as an external associate since 2004), the Dubrovnik Chamber Orchestra (2008-2011), the Croatian Chamber Orchestra (2010), and the Croatian National Theatre Orchestra (2010 – 2011.) From the year 2012 to April 2019 she was a member of the Croatian Radio-Television Symphony Orchestra. She has performed in numerous chamber ensembles and has performed a number of solo performances with pianist Zrinka Ivančić, cello player Ljerka Končar, together with the Dubrovnik Symphony Orchestra. Since 2017, she has been a member of the Vortex Strings string quartet dedicated to a genre-rich repertoire of classical music and jazz and classical arrangements of popular music. Ana Dražinić participated at a series of festivals performing classical and contemporary music: Milko Kelemen Days in Slatina, Papandopuliana in Sibenik, Musical Evenings in St. Donat in Zadar, Musical Forum in Opatija, Samobor Music Autumn, Splitsko ljeto and the Dubrovnik Summer Festival. She was a member of the RIM Chamber Ensemble from 2014 to 2017. Since 2019 she has been engaged in pedagogical work as a violin teacher at Luka Sorkočević Art School in Dubrovnik.