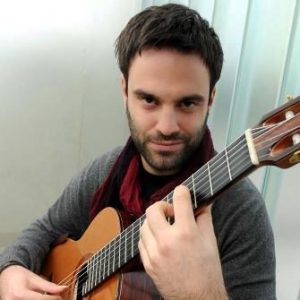 Damjan Bučić was born on May 10, 1985 in Rijeka. He gained primary and secondary music education at the Music School of I.M.Ronjgova, in the class of professor Antonio Mrčela, instrument guitar. He continued his music education by enrolling the Music Academy in Zagreb in the class of Professor Istvan Roemer 2004/2005. He graduated in 2008 with diploma of soloist and guitar professor with Master degree. He has been actively participating in the masterclasses of eminent world guitarists and pedagogues – Carla Marchione, Zoran Dukić, Pavel Steidla, Costas Cotsiolis, Marc Tamaya, Marcina Dylle, Paola Pegoraro. He also played in chamber ensembles with violin and guitar quartet. He played in a series of concerts during his education at the Academy of Music, and as soloist in Croatia, Italy and Austria. He won a scholarship of the City of Rijeka and Primorsko-Goranska County. He was received without the need to take the entrance examination (due to the well-made masterclass) at the guitar academy ‘F. Tarrega ‘in Pordenone (Italy), in the class of professor Paolo Pegoraro on specialization in guitar studies, and with the same mentor he continued his studies at the Kunstuniversitat Graz in Austria where he completed his Master’s degree in January 2013. Currently he is playing on the instrument built by Petr Matoušek from Czech Republic. Damjan Bučić is engaged in pedagogical work as a guitar teacher at Vatroslav Lisinski music school in Zagreb. He has actively participated in the work of SOG organization from 2012 to 2015.