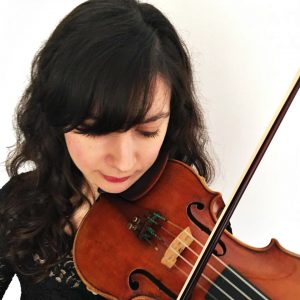 Đana Kahriman was born in 1989 in Dubrovnik. He started studying violin at the Luka Sorkočević Art School in Dubrovnik at the age of seven, in the class of prof. Ivančica Kalanj. In 2011 she graduated from the Music Academy in Zagreb in the class of prof. Leonid Sorokow, where she continued her artistic training. She is the winner of five first prizes at the State Competitions of Students and Music Teachers, and at the International Competitions of Etudes and Scales in Zagreb, Rudolf Matz in Dubrovnik, Beethoven at St. Patta, Verdi Note in Rome and the International Violin Competition in Kazakhstan. She has performed with the Sarajevo Philharmonic Orchestra, the Zagreb Philharmonic, the Kaunas Philharmonic Orchestra, the HRT Symphony Orchestra, the Croatian Army Orchestra, the Varaždin Chamber Orchestra, the Zadar Chamber Orchestra, the Zagreb Soloists and the Dubrovnik Symphony Orchestra with which she has performed regularly since she was eight years old. Solo performances include performances at Dubrovnik Summer Festival, Osor Music Evenings, Senj Musical Evenings, Music Evenings in Sv. Donat, Samobor Music Autumn, Music Biennale in Zagreb, Croatian Music Festival in Vienna, Festival of Young Musicians in Lithuania, Franjo Krežma Memorial, Musica Eterna, Musical Scene Amadeo, Epidaurus Festival, Pula Music Festival, Virtuoso Cycle, Masters Players, Croatian Days of culture in BiH and the promotion of Dubrovnik in New York City 2015. She was awarded by the Stjepan Šulek prize for the performance at the Closing of the 64th Dubrovnik Summer Festival. As a chamber musician, she has been involved in projects by orchestras of young musicians  in Germany, Hungary and Austria. She took part at seminars and workshops of prominent pedagogues such as Leonid Sorokow, M. Sorokowa, G. Končar, A. Šešek, G. Zhislin, A. Vinnitski, A. Sorokow, Z. Bron, B. Kuschnir and P. Zukerman. She is a member of  Zagreb Soloists ensemble and Concertmaster of the Dubrovnik Symphony Orchestra. She performs occasionally as a associate of the Music Trek Ensemble. She collaborated with RIM organization in 2018 on the Women in Music project.