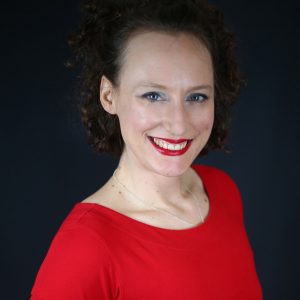 Frana Marija Vranković graduated theatre directing at the Academy of Dramatic Art, University of Zagreb. For her master’s production, she translated and directed Tennessee Williams’s The Two-Character Play. In 2011 and 2012 she received The Rector’s Award (University of Zagreb). In 2008 she received “Tomislav Durbešić” scholarship. Since 2008 she is a member of Croatian Association of Dramatic Artists. She directed 30 plays, concerts, events, one musical and three operas. For the past 12 years, she works as drama pedagogue and holds theatre workshops and drama groups in English, French, German and Croatian. She is an expert associate on Scenic culture courses at the Faculty of Teacher Education since ac. year 2015/16. She also holds a theatre directing workshop at a specialist study of Dramatic Pedagogy at the same University. While working with young adults in Private Art High School in Zagreb (2013-2018) she used invisible theatre and other forms of the theatre of the oppressed to explore how teenagers perceive the world and how the world perceives them. She was the president of Young Theatre Artists at the Croatian Association of Drama Artists (www.hddu.hr) from 2014 till 2018 and organizer of Days of Young Theatre Artists held in Theatre Gavella in Zagreb. Her project Young for Young in a Small Town is financed by Croatian Ministry of Culture. Regularly she holds theatre directing workshops in Theatre Tirena in Zagreb. Since September 2018. she works with children and young adults in Krk’s Drama studio Frankopan and is head of theatre department of Zagreb’s Trešnjevka Cultural Centre. She takes part actively in the work of RIM organization since its foundation (from 2012).