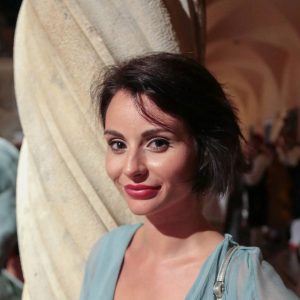 Iva Dedo (1985) was born in Dubrovnik where she finished elementary and high school education. She graduated in Public Relations in 2010 in Zagreb and developed her knowledge at the London School of Public Relations. At the same time she completed the study of Journalism. She is a long-time employee in the media. In addition to the festivals of music, drama and dance (Dubrovnik Summer Festival and Zagreb International Chamber Music Festival) where she worked as a PR assistant, she worked as a journalist / editor in the printed (Objective, The Men, The Best Shop and DuList) web (Portal Oko , Nportal and DuList) and television (DUTV) forms. On local television, she is the author of documentary shows on culture, art and Cultural Heritage with focus on the Dubrovnik area. Since 2017 she has been a member of the RIM organization, in which she collaborates on Heritage interpretation projects and signs documentary-visual materials of the Renaissance Garden project, which was produced by Dubrovnik Summer Festival in 2018.