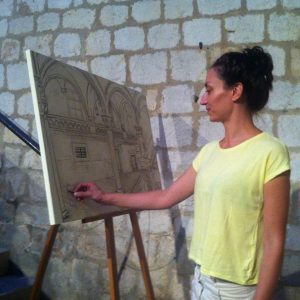 Nikica Pavlović was born in l984. in Dubrovnik. She graduated from the Art School of Luke Sorkočević, after which she enrolled at the Art Academy of the University of Split. She participated in the competition of the secondary art schools in Čakovec with a maket of the Dubrovnik ship karaka made in Carta Pesta . In 2002 she was part of the Dubrovnik Summer Festival and painted fabrics for theater productions. She also participated in the “Pantela” production project in 2003, then in the Art workshop at the Artur gallery in Dubrovnik in 2004. She exhibited at numerous exhibitions: School of Art in the Gallery “Sebastijan”, Dubrovnik 2008, UMAS students’ exhibition, Multimedia Cultural Center, Split 2009, Art workshop “Gift” – project of students of the Academy of Fine Arts from Braunschweig (Germany), Toulouse (France) In the painting division of the Split Art Academy. She has performed a series of works presented at the exhibition held in the Multimedia Cultural Center in Split. She participated in the Weltschmerz project of the RIM organization in 2013.