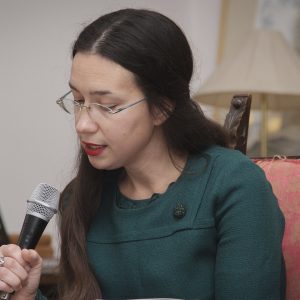 Petra Jelača was born in Dubrovnik on November 14th 1981. She graduated from the Faculty of Philosophy in Zagreb with comparative literature and Italian language and literature, and graduated from the Paul Valéry University in Montpellier. Theatrical criticisms, literary and theatrical articles and essays were published in many professional journals (Kazalište, Kolo, Dubrovnik, Vijenac), and in various programs of the First and Third Program of Croatian Radio. She worked as a dramaturgist in theater and radio, as a translator from French and Italian, as a professor of the same languages, in the French Alliance in Dubrovnik, and in several primary and secondary schools. She is primarily active as a theatrical critic, in the show ‘Face and Shadow’ of the first program of Croatian Radio, Business Magazine Lider, and since 2015 on the portal Dubrovnik.net. She publishes a shorter prose and a lyric, in the ‘Words and Words’ of the Third Radio program of Croatian Radio. She collaborated with RIM organization on the project performances in 2013 and 2018.