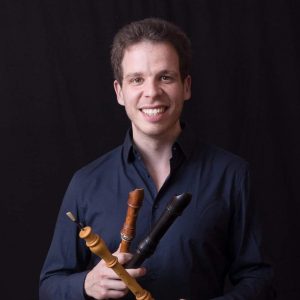 Stjepan Nodilo was born in 1986. in Dubrovnik, where he finished elementary and secondary music education. Further music education, specialization in the field of Early Music, continues abroad: since 2005 he has been studying the block flute in Vienna at the University of Music and performing arts in the class of Prof. Hans M. Kneihsa, where he graduated in 2012. He also studied Baroque oboe in the class of prof. Carin van Heerden at the University Anton Bruckner in Linz. and in class of prof. Andreas Helma at the University of Graz where he is currently attending the Master. He is actively playing in numerous ensembles in Austria and Germany. Among the most significant musical collaborations are the ones with T. Koopman at the University of Linz, E. Onofri, Aapo Häkkinen from the Helsinki Baroque Orchestra and L’Orfeo Baroque orchestra from Linz. Since 2016 he has been the first oboist of the Croatian Baroque Ensemble in Zagreb. He collaborated with RIM organization in 2016 on the project The other side of History.